A Summer Story 2022–The Ultimate Guide for Holidaymakers

A wonderful dance music festival that goes by the name A Summer Story 2022 is hosted outside of Spain’s capital city in the suburbs.  Every year since its inception in 2015, the festival’s rosters have been packed with a wide range of electronic music talents from all around the world.

As a two-day event, the festival aims to appeal to a wide range of music fans, with popular DJs, renowned EDM artists, house and techno stars, and hardcore acts all on the schedule!

A year-round venue for concerts and festivals, Ciudad del Rock is a 200,000-square-meter open space near Arganda del Rey, southeast of Madrid that will be hosting the Summer Story in 2022.

Approximately 15,000 people are expected to attend this amazing music event. Due to the corona outbreak of 2020, the traditional festivity was postponed till this year but it is back with a bang!

Excited? Well, you should be! But, ensure that you get your Spain Visa Online well in advance. This will help you to enjoy a hassle-free trip to Spain.

Enough with the intro about the festival, let’s dive right into the world of Summer story!

A Brief History of A Summer Story 2022

On July 10th, A Summer Story was created, and it continues to change the country with each new edition. Since its inception in 2015, the festival has featured the work of hundreds of artists from around the world.

Since its beginning in 2015, the festival has taken place on the summer solstice, thus living up to its name. 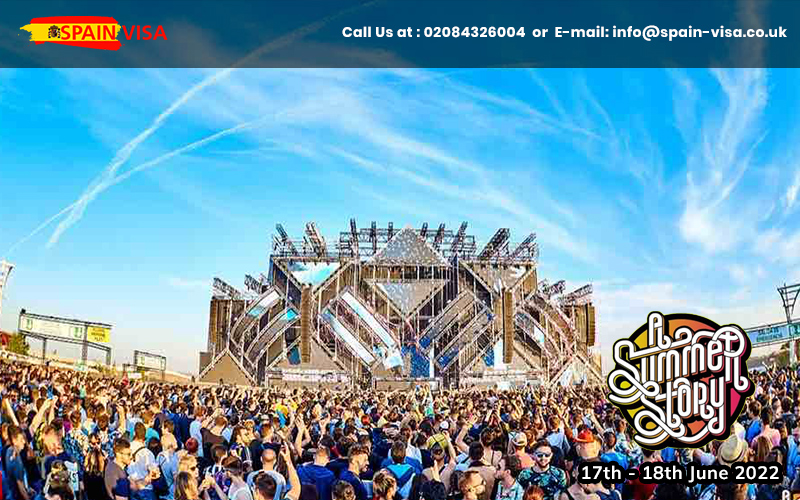 Not to mention Fluge, the event’s audiovisual display, one of the strongest features, who has always been by the event’s side.

It’s the industry’s top player, in charge of supplying the festival with the most cutting-edge audio, video, and lighting equipment available. So, you can expect some great audiovisuals during the event.

Did you know?  For this two-day festival, DJ Snake and Fatima Hajji have been asked to perform in a variety of genres like trance, EDM, and techno across six different stages!

Is it possible to envisage waking up to a summer solstice filled with excitement and anticipation? It’s happening in A Summer Story! It’s the festival that has become the standard in both Madrid and Spain.

A Summer Story is a well-respected national event with four stages, an eating area, free water fountains, parking, and VIP areas. It has received high praise from critics. And music is the ideal medium for indulging in the fervor that unites us all.

As a relatively new dance music festival that only began in 2015, A Summer Story has already established itself as a major one, with a record-breaking crowd of more than 100,000 people in 2019.

In addition to the numerous shuttles that take you to Ciudad del Rock, the festival offers more than 6,000 parking spaces.

World-Renowned Artists Perform at this Event

It’s no secret that the stages of A Summer Story have hosted some of the biggest names in electronic music. 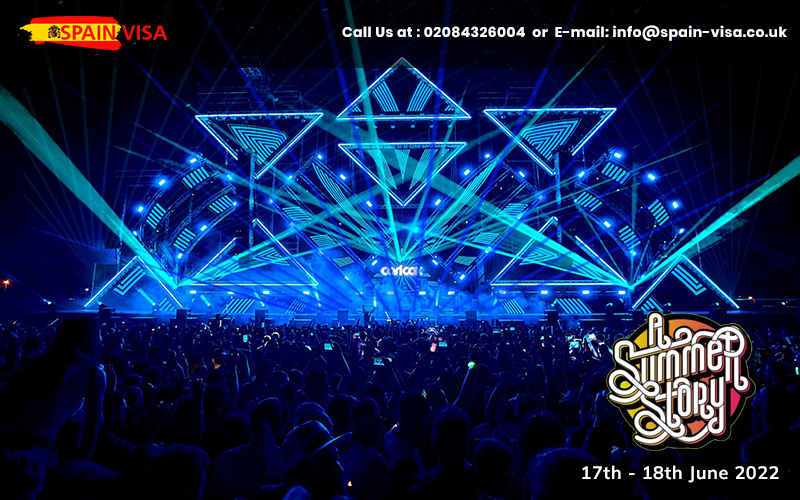 The festival, which made its debut in 2015, is still relatively new, but it consistently curates stellar lineups that include top performers from all corners of the genre spectrum.

In light of the announcement of the official lineup for the 2022 event, it is clear that the organizers will continue to invite amazing artists event year.

In previous editions of the Spain music festival 2022, the techno music assured a constant flow of dancers which makes it a great dance event too. House and techno acts perform on a second stage alongside the EDM heavy hitters on the main stage. The two-day event will also feature hardstyle artists.

Did you know? This year’s lineup includes DJ Nano, DJ Snake, Chris Liebing and DJ Tiesto, among others. These are some of the most well-known names in electronic music!

This year’s festival has general admission tickets available for roughly €70-90, which allows you entry to both days. As a result, tickets to A Summer Story are on the lower end of the price range compared to those for electronic music festivals.

For two days at other well-known live music events in Spain, tickets cost about €125. An alternative that’s less expensive yet still enjoyable is A Summer Story!

Each Summer Story Stage is Unique

There were a record-breaking 100,000 attendees at the 5th edition i.e., 2019, as well as more captivating stage designs, which demonstrated how much this festival has evolved in a short period (the festival’s 1st edition started in 2015)

The Main Stage – In the shape of a contemporary pyramid with lavish lights, the main stage was 35 meters high.

Air Europa – Although the stage shape was a rectangle, the Air Europa Stage had excellent projection systems and a more traditional festival aesthetic.

Live & Techno – The computer game Space Invaders served as an inspiration for the Live and Techno stage, which featured figures from the original game on either side.

In Arganda del Rey, southeast of Madrid, the Ciudad del Rock is a 200-hectare open space venue where the event will be organized. Not just that, throughout the year, there are numerous festivals and concerts that are held in this amazing venue. So, get ready for some exhilarating music!

As the Ciudad del Rock (City of Rock), rated as the greatest venue for high-level events, grows with the organizers, the organizers are enthusiastic about capturing even more moments and stories of its attendees!

In order to present the audience with the most astonishing quality in all aspects, the organizers continue to broaden the event’s horizons year after year.

Joining the Summer Story is the most spectacular way to begin the summer!

Fatima Hajji, Timmy Trumpet, and Recycled J were the first three performers to be confirmed as part of the A Summer Story 2022 lineup.

However, according to the festival’s social media networks, certain DJs from the original 2021 line-up will remain part of the event.

This year’s festival has also recently announced the second round of DJs who will perform. Andrés Campo, The Martinez Brothers, Morten, DJ Nano and Grace y Farago are among the artists who have been revealed.

That’s not all: Alan Walker, Amelie Lens, and Armin Van Buuren have all been named as the festival’s headliners. Among the other performers scheduled are Charlotte De Witte, DJ Snake, Joseph Capriati, and many more.

Renowned artists/DJs who will be headlining the popular event are DJ Tiesto, MORTEN, Mike Williams, Amelie Lens and Brennan Heart amongst others!

Tickets for the festival have already been put on sale for €44, which is the cost of admission for each day of the event. So, if you want to attend the entire event you will need to take 2 tickets (44 Euros/day).

Attendance will be permitted on both days of the event, June 17 and 18, with the use of these passes.

Those who purchased tickets for the original event in 2021 but were unable to attend will be able to do so for the new event.

Enjoyed reading about the festival? Will this help you to materialize your Travel to Spain? Just make sure to apply for a Spain Visa from UK well before your intended dates of travel to have a hassle-free travel experience.