The history of Alhambra Palace Spain

The Alhambra (the red one) is a palace and fortress complex located in Grandara, Spain. Originally it was constructed as a small fortress in AD 889 on the remains of Roman fortifications, and then it was largely ignored until its ruins were renovated and rebuilt in the mid-13th century. Then it was converted into a royal palace in 1333. After the conclusion of the Christian Reconquista in 1492, the site became the Royal Court of Ferdinand and Isabella, and then the palaces were partially altered in the Renaissance style.

A Moorish poet described it as “a pearl set in emeralds”, which is an allusion to the color of its buildings and the woods around them. The complex of the palace was designed with the mountainous site in mind and many forms of technologies were considered. The park in Alhambra known as Almaeda de la Alhambra is overgrown with wildflowers and grass in the spring. However, its most characteristic feature is the dense wood of English elms brought by the Duke of Wellington in 1812. The park is very beautiful and has a multitude of nightingales and is usually filled with the sound of running water from several fountains and cascades.
The decoration of Alhambra consists of the upper part of the walls, as a rule, of Arabic inscriptions. Also, most of this ornament is carved with plaster rather than stone. Similar designs are displayed on wooden ceilings. The main elements for vaulting with Stuccos are Muqarans. However, some of the most accomplished dome examples of this kind are designed in the Nasrid style, the last blooming Islamic art.

What is Alhambra famous for?

If we talk about Granada, it is one of the most charming cities in Spain. There are plenty of tourists that come to Granada every year to get to know it through the streets of its traditional look. The major attraction is always taken by the main enclaves and monuments as they create a fascination halo. Alhambra is now one of Spain’s major tourist attractions, as it exhibits the country’s most significant and well-known Islamic Architecture and later also shows us the Christian building and garden interventions. It is also well-known that Alhambra one of the Spain attractions has now become the UNESCO World Heritage site.

Why Should Tourists visit Alhambra Palace?

Alhambra is one of the best places to visit in Spain; it comprises of beautiful and fascinating structure and also attracts tourism a lot. It is also one of the most beautiful and world’s most spectacular and evocative places. It was named after the color of the beard of the sultan that founded it. If you are a lover of ancient art than this could be the best place that you can visit. However, there are some main reasons why you should visit the Alhambra palace:

1. The Alhambra Palace has a lot many stories to tell :

Alhambra has been a place of mystery and many sultans therefore you can find a bunch of ancient stories here, these stories can entertain you and also help you with the history and many other facts about Alhambra. 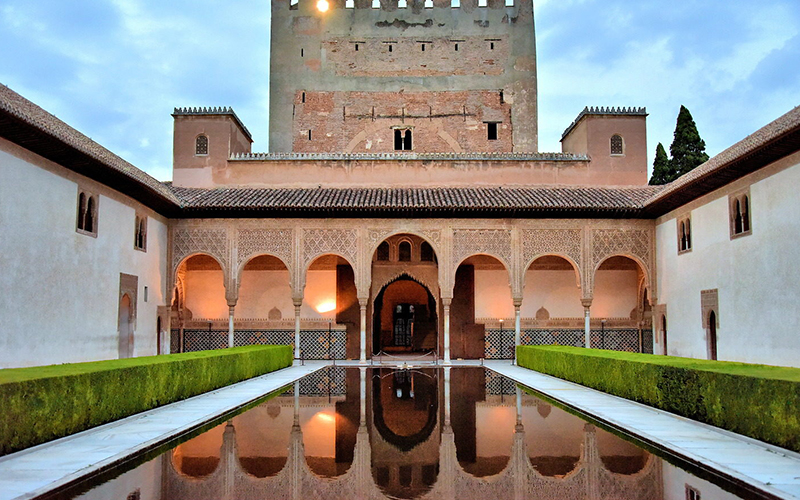 If you wish to find paintings and pictures inside the Alhambra Palace, then you will not be able to find it because the Alhambra itself is a masterpiece of inlays and colors that cover every centimeter of the walls of the buildings.

Alhambra is not only the home to art, literature, and legends but also extraordinary nature. The palace itself stands on a hill that is surrounded by dense forest. These dense forests also contain great gardens that have the triumph of flowers, plants, and perfumes.

Alhambra being a palace stands in a privileged position at the top of the city. The highest point is known as Alcazaba. You can see the breathtaking view of Granada from the top of Alhambra which is really very beautiful.
After getting to know all these details about Alhambra Palace Granada, you must be thinking of visiting this place as soon as possible. If you are a lover of Ancient art and literature than this is the best place for you. You can easily apply for Spain visa and then once you get your Spain visa you can travel to Spain so that you can explore the mesmerizing beauty of Spain.